Wedged in a closet tight with clothes, the green linen dress hung on a paper-covered hanger. It was sandwiched between a blue and white floral bathrobe from my junior high years, a robe made from the sort of early polyester that will survive the annihilation of the planet, and a granny (read maxi) dress that my mother made me sometime in the 1970s. 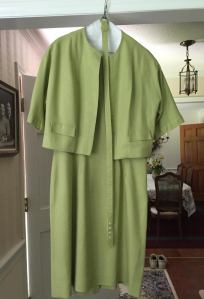 With just weeks to go before my daughter’s wedding, my mother, sister, and I had come to the closet seeking dresses of weddings past. We’d come to the right place. Artifacts of the decade before I left home were pressed together in my old bedroom’s closet: bridesmaids’ dresses, a prom gown or two, the dresses that my mother wore to both my wedding and my sister’s wedding, and that junior high bathrobe and its classmates.

But there in the middle was a dress I didn’t ever remember seeing–not quite avocado green linen with a matching short sleeve jacket and fabric-covered skinny belt, at once very current and also very Jackie Kennedy and the ’60s.

“Mama made that for me after your brother was born,” my mother said as I reached past her to grab the hanger. I held it up, flipping the jacket onto the bed so that I could size up the dress. My brother was born in February 1962.

“She never used a pattern,” Mama said. “Just looked at a dress and then went home and made it.” So without pattern or live body to fit, my grandmother had created the dress. I’d been looking for something to wear to my daughter’s rehearsal dinner and despite a bit of snugness, the dress was it.

I imagined my grandmother in North Carolina fifty-three years earlier, packing the dress in tissue and mailing it, and my mother in the postwar tract house we lived in in Missouri opening the package–the sight of the dress bridging the 983 miles from one home to the other.

The amount of handwork in the dress and the fabric belt gave me pause. Granny Hawley would have created the dress in her “spare time” after she had worked a forty-hour week at the cotton mill where she was a spooler, combining thread from ten to fifteen bobbins into one. She’d created the dress during the evenings or Saturdays when she would have sewn. For even after she couldn’t regularly attend church and sing in the choir, she honored that seventh day. Not by resting comfortably, but by doing only that which must be done—cooking and dishes and the like (unless her ox was in a ditch).

The dress was likely among the last things that she made this way. In June 1964, my grandmother suffered a stroke and had to be carried from the mill that she’d worked at for close to forty years. I wasn’t quite five years old. We’d lived halfway across the country for a few years, and the only clear image I have of my grandmother walking comes from a short clip in a family home movie. The stroke paralyzed her left side, and she became wheelchair-bound until her death twenty-nine years later. She persevered despite setbacks that would have stalled a lesser person, and I’m so thankful that I knew her.

Even though my idea of sewing is reattaching buttons and I’ve been known to scotch tape up the hem of a pair of pants, I hope that I’m cut from the same cloth as my grandmother Mary Lena Hudson Hawley, that among other things I’m steadfast and kind—two ways that my grandmother will always be remembered. I hope that somewhere in my stitching her DNA is strong.

The dress in action–